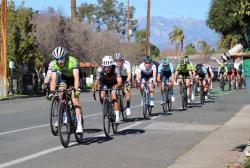 Alex at the front of the peloton. Photo: M. Higginson

PCC riders took part in the Redlands Classic from March 13-17. It was the 35th Annual event for this popular racing festival held in Southern California. Alex Amiri, Chris MacLeod, and Holly Simonson participated, however Chris crashed in stage 3 (he was unhurt), and Holly had the flu forcing her to withdraw after the second stage.

Alex, who has been training in Tucson since February with Re-Cycle Tucson, had a good race. This year’s race started much earlier than last year’s in May, so it was the first real test of the legs for most of the Pro’s and amateur racers. “I was coming into the race with very little certainty of actually racing until just a few days prior to the start, when a guest spot on a team, Support Clean Sport, opened up for me,” Alex said.

The first stage was the time trial – an out and back on a hill. “Given I raced it on a road bike, my time of 17 minutes on the 11km course faired quite well. The legs felt quite good, I didn’t expect much of a result, and was happy with the outcome,” he commented.

Stage two was the Highland Circuit Race featuring one, steep climb, taking 2-2:30 minutes to complete. “We did this 20-times, and it took its toll as the race lingered on,” Alex said. “There were a few crashes through the lower technical section after the descent, so the goal was to stay safe and save the legs for the following stage.”

The second stage was the Oak Glen stage, finishing at the top of Oak Glen Road after six laps of a circuit which included a 10-minute climb. Alex recalled: “The legs today were great, up until the base of the final climb. A combination of heat and potential lack of nutrition throughout the stage may have played a role, but at the end of the day, it wasn’t meant to be. I did my best to save the legs for my next opportunity in the following two stages.”

Next up was the Criterium, which was the first crit of the season for many of the riders, and Alex said the nerves were quite high. “A lot of riders with nothing to lose were taking quite a lot of risks, resulting in unnecessary crashes. My experience on the track came to be of value, as I did well to avoid crashes and other incidents, staying safe and upright.”

The final stage was the Sunset Loop Circuit race, arguably one of the most difficult stages of a race to complete. With the GC wide open, nobody was holding back, Alex recalled. “My goal for this stage was to ride in the early breakaway as it allowed for steadier riding until later in the stage when we would inevitably get caught by the lead group. On lap two at the top of the climb a group of four including myself managed to break away and gain a minute on the field pretty quickly. Once we got caught I was able to stay with the reduced group to the finish.”

Alex was very pleased with his performance. “Racing these events against all the pros, for me, is a good test of where I stand in the domestic pro peloton. After a bit of a rocky start to the race, and some minor disappointments, the legs came around and I had a great ride on the last stage.”

“I would like to thank Trevor Connor, The Paleo Diet for sponsoring me as well as the freedom provided by my Vancouver based-team, Glotman Simpson Cycling, and Pacific Cycling Centre Coaching for enabling me to race.”

Alex will stay in Tucson until early April for more training and racing with Re-Cycle Tucson before coming back to Victoria.