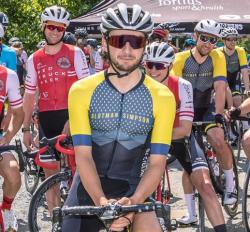 PCC’s Alex Amiri will be spending the summer in Europe riding for 303 Project, a US based UCI Continental Team. Alex, who has having one of his best ever season’s, left for Europe after riding for Cycling BC in the Tour de Beauce last week.

Talking to Canadian Cyclist, Alex said: “Getting on a team like 303 is pretty huge.  Being on a Continental team provides opportunities I wouldn’t have had access to otherwise.  Meeting the guys and making these new connections is really important to me; I can’t wait to get to know everyone.”

Voted Cycling BC’s 2018 Elite Male Sportsperson of the Year, Alex successfully took the KOM polka dot jersey at the San Dimas Stage Race in April. Early in the year he was training in Tucson with Re-Cycle Tucson, gaining valuable riding hours and competing in races such as the Redlands Classic.

“I would like to thank my team Glotman Simpson for their support over the last year and a half, The Condo Group, Trevor Connor, Bridge the Gap fund and the Pacific Cycling Centre and Head Coach Houshang Amiri.”

Alex’s first outing with the team will be in the Tour of Sibiu, Romania from July 3-7.