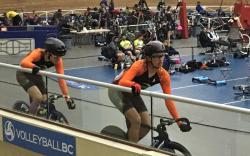 PCC Athletes have been on the road and this past weekend achieved some notable results. Caleb Bender competed in the Bare Bones Track Race in the Burnaby Velodrome and on Saturday won the Men B-Omnium race.  Hailing from Saskatchewan, Caleb moved to Victoria to join the programs at PCC and to take advantage of the vast coaching skills that Houshang Amiri offered.  This was after teammate Micaiah Besler moved from Saskatchewan in the fall of 2018.

Caleb was pleased with his performance. “I really enjoyed the opportunity to take part in the Bare Bones racing against some strong competition. I’m really happy with how the weekend went and was glad to see the legs getting used to the track as the weekend went on. With this additional preparation, I’m excited to take on track nationals in a few weeks.”

Caleb then competed in the BC Cup series in Abbotsford on the Sunday. PCC athlete Amiel Flett-Brown, competing in his first BC Cup, finished third in the Cat 1/2 road race. “The spring series race at Abbotsford was a great way to cap off the weekend, and it was great to get in some more early season road racing. Huge thanks to Houshang for running this project for us, and for making the trip so successful,” added Caleb.

Prior to the weekend, coach Amiri attended a Cycling BC track selection camp from March 14-15 in preparation for the Junior Track Nationals to be held in April in Milton, Ontario.