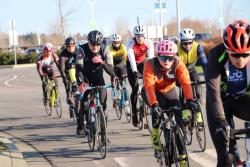 Pacific Cycling Centre’s second camp of 2019-2020 took place last weekend under cool but sunny temperatures in Victoria. The four-day camp kicked off on Thursday November 28 with a 100km loop through Saanich and Sydney, which included a loop of Lands End. This first ride was set at a steady pace, keeping in mind that the rest of the camp would have some timed testing and off-season maintenance intervals as they hadn’t been in training zones since the racing season.

Day two saw the riders tackling another endurance focused ride in the hills around the Metchosin area – host to the BC and Masters Nationals Road Race course – before taking on the winding roads around Prospect Lake to the airport. Everyone kept a steady pace on the challenging terrain ensuring the riders kept warm in the cold November weather.

On Friday evening the riders were treated to a special guest appearance from Olympian and former professional rider Erinne Willock. Erinne gave an in depth run down of her career and experiences sharing many helpful tips on nutrition and race preparation.

Saturday was another endurance ride with a mid-ride team time trial to reintroduce everyone to some sub-race paced riding. This allowed Head Coach Houshang Amiri to analyze and set some benchmarks for the season to come. Included in the warm up were some pedaling technique drills up Observatory Hill, which included a stop at the top to fuel up and practice some of the tips given in the previous night’s seminar.

The last day of camp was a long one with some riders feeling the effect of the accumulated hours in unusually colder temperatures. As there was light snowfall on the Malahat north of Victoria, the plan was adjusted to a flatter terrain. Riders were tested again along the road up to the Saanich Observatory, including four repeats up the hill. They were later pared into small groups of similar ability to race around Lands End. There was a surprise detour near the end of the ride at around four and half hours in, where the riders were tested by the steep inclines of Dean Park Road. Coach Houshang wanted to throw that one into the mix before the winter snowfall cuts the road off for the rest of the winter.

“This was a great camp which brought everyone together for some good riding and to share knowledge and experience,” said Houshang. “The provided an opportunity for younger and upcoming riders to train and learn from PCC’s elite riders.”