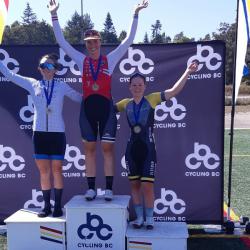 Coming off a successful win in the Keirin at the NW Track Championships the week before, Parker won the U17 titles in the Omnium, Kieran, Matched Sprint, Team Pursuit, Team Sprint and in the Youth Madison.

“There was great racing at the BC championships last weekend, I was happy with all of the athlete’s efforts and hard work,” said head coach Houshang Amiri. “The results are a clear indication of this. Now we will move towards a new level of performance goals.”