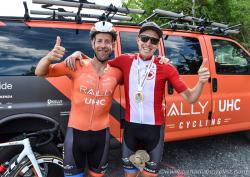 Pacific Cycling Centre alumni were out at the Canadian Road Nationals over the long weekend in July and secured a one-two result in the Time Trial. Rob Britton took the win over 11-time National TT champion Svein Tuft. They are also teammates, cycling for Rally UHC.

Both Rob and Svein were part of the cycling programs at the National Cycling Centre in Victoria. Rob from 2004-2009 and Svein from 2005-2009. Svein is a silver medalist at the world championships and he came ninth in the time trial in the Beijing Summer Olympics. “I had the privilege of working with both of them in the first few years of their development,” said Houshang Amiri who coached them at NCC.