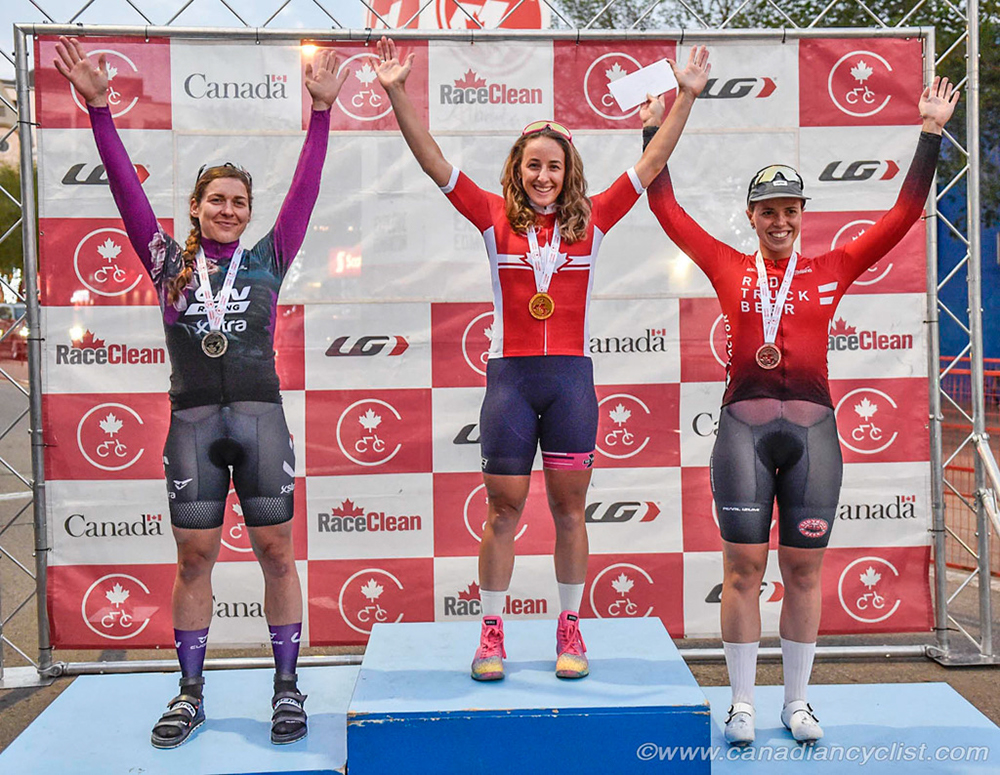 Holly Simonson (right) on the podium. Photo by Rob Jones/CanadianCyclist.com

Congratulations to Holly Simonson for winning bronze in the criterium at the Canadian National Road Championships on Sunday in Edmonton. It was an exciting race with several breakaways at the front and the lead riders not decided until the last lap.

“I am really happy to bring home my first medal from a road national championships and I could not have achieved this result without the constant support of my coach Houshang, as well as my team and my family,” said Holly. “I was really suffering in the first half of the race, but my teammate and fellow PCC coached athlete Brenna Pauly saved me and brought back a dangerous breakaway when I didn’t have the legs. This gave me so much motivation, and allowed me to safely make it into the mix for the final. By the end I had definitely found my crit legs and I just went for it through the final corner. Being on the podium with racing sensations Maggie Coles Lyster (DNA Pro Cycling) and Alison Jackson (Liv Racing Xtra) was super exciting and gives me confidence to keep pushing myself to the next level.”

Next up for PCC riders is the Tour de Concord Vancouver Criterium on Thursday, June 30 from 3:30 pm.

PCC athletes are going into the second part of the season with several track races coming up, including the Vision GP at the Jerry Baker Memorial Velodrome August 12–14, the BC Track Provincials in Victoria from August 19-21, and the Track Nationals in Milton, ON from September 2-4.