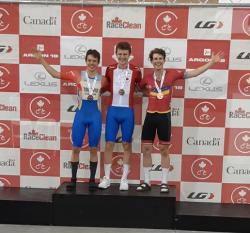 This year the quality and speed of the racing was world class since the entire Canadian men’s Olympic pool was racing, and while inspiring to see this level of Canadian riders, this made it a challenge for those who were not part of the program.

“Competing at this level of racing requires a high level of preparation – mentally and physically – and a certain amount of self-confidence and Amiel was up to the task,” said coach Amiri.

Amiel prepared well for the Track Nationals, starting after BC Super Week in mid-July, training at the Harry Jerome Sports Centre in Burnaby while also managing his work.

“He focused well and approached every single training session very seriously following his training program in detail, resulting in an impressive performance in the Men’s Omnium,” added Amiri. “It was exciting and very motivating for me to work and coach Amiel, and I knew he would deliver when he needed to.”

“Receiving a bronze medal at the National Championships was a humbling experience and exceeded my expectations,” Amiel said. “I had worked intently with my coach Houshang over a 12-month period of focused work. He had mapped out my training and season meticulously and prepared me to be on the podium. I couldn’t be more thrilled with the results in such a deep field, coming in to an Olympic year.”

The other notable podium performances at the track nationals was in the Men’s Madison where Cycling BC team achieved a second place finish.