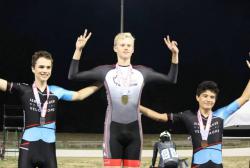 “There was a considerable amount of time before the bike pulled off at this track and so I moved to the very back and conserved my energy,” Parker recalls. “Eventually in the last lap with 200m to go I used my extra energy to take off and sit on the leader’s wheel, where I came around in the last straight and took it at the line.”

“Overall there were some good moments and experience with this result and as a Canadian U17 it was something I hadn’t been yet been exposed to.. With the help of Houshang’s coaching at Pacific Cycling Centre I was able to adapt quickly and I was happy I went and am looking forward to returning next year,” he added.

“At 16 Parker is part of Pacific Cycling Centre’s talent development program. He is a very motivated and hardworking young athlete and I see a good future for him in the sport,” said coach Houshang Amiri.

Parker will be racing this weekend at the BC Provincial Championships in the Westshore Velodrome in Colwood.