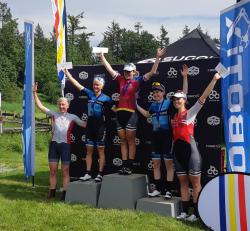 Brenna (middle) and Holly (right) on the podium. Photo by PCC.

This past weekend PCC riders were busy competing in the 2019 Cycling BC Elite and Master’s Road and Time Trial Championships in Langley, as well as the Junior and U17 Championships in Penticton.

It was a golden moment for Brenna Pauly, taking the elite woman’s provincial title in the road race, while Holly Simonson won the U23 championship. The previous day in pouring rain Holly finished third and Brenna fourth in the time trial.

In the men’s elite road race, only half the field completed but due to great team work on the Glotman•Simpson Cycling team, Jackson Bocksnick and Amiel Flett-Brown came second and third. Alex Amiri came fourth in the men’s elite time trial on the Saturday.

In the Junior Championships in Penticton Aedan Crocker (U19) and Parker Swanstrom U17, also competed, however as they were placed in sub categories no BC Championship was awarded.

“As a coach I was very pleased to see the a great improvement in all PCC riders. This is good preparation for the National Championships in Quebec,” said PCC head coach Houshang Amiri.