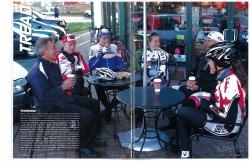 Cycling legends captured by Scott Mitchell of Trek in December 2011.

Pedal Magazine has made an announcement that it is closing after 30 years in the cycling business. The magazine under editor Benjamin Sadavoy, has been a great proponent of the Canadian cycling scene with its in depth articles, reviews and race news.

The magazine – in print and online – was a great supporter of the Pacific Cycling Centre publishing news of our athletes over the years and promoting our camps. One issue in late 2011 featured a full page photo of coach Houshang Amiri, Svein Tuft, Erinne Willock, Rob Britton, Annie Ewart and Jamie Sparling enjoying a coffee after a camp session in Victoria. Cycling legends captured by Pedal – with help from photographer Scott Mitchell of Trek Bikes.

Thanks Benjamin for your major contribution to Canadian cycling.