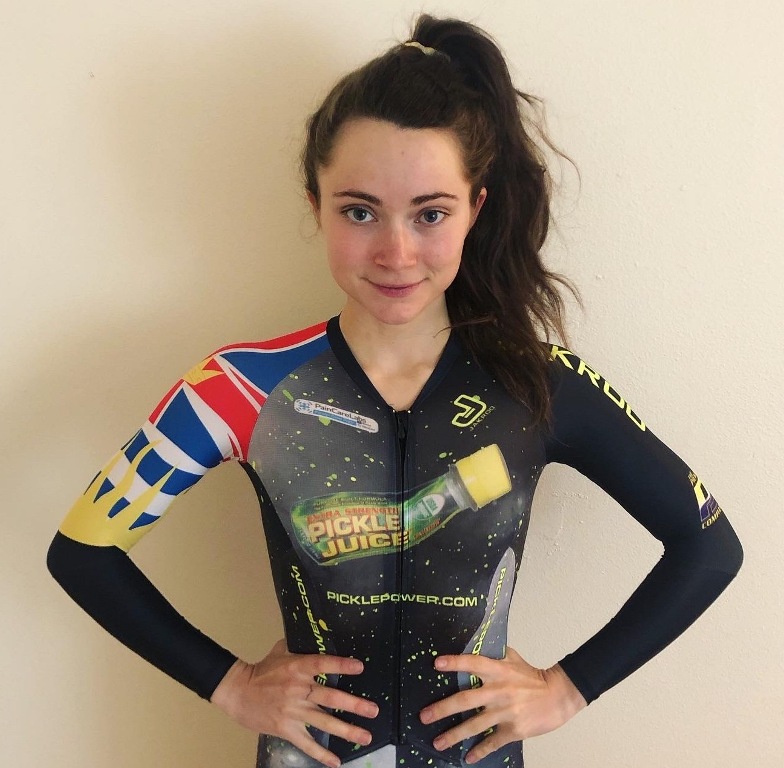 Zoe – who cycles on the Pickle Juice Pro Cycling Team – is based in Portland, Oregon. She was excited but also nervous to race these virtually as she heard they were quite hard. At the Crit start line her heart rate went over zone 2! “When the race started, I was pleasantly surprised that it was not as challenging as I expected. By about halfway through I was in the front group of 10 riders, and it stayed that way until the bunch sprint, which was the most challenging part of the race because I am still learning the physics of the game and did not know when to jump.”

The road race the next day though was “super fun,” she said. “From the gun, my teammate, myself, and another rider we had marked from the day before were in a three woman break. Pretty quickly we had a huge gap and knew there was no way anyone else was going to catch back on. Still the pace was high and every rider was throwing attacks – myself included – trying to fatigue the others or maybe get away. This was when I had to face one of my biggest mental challenges: the knowledge that even if I got dropped from the break, I would still be “on the podium.”

She then remembered a phone call with coach Houshang Amiri a few weeks before. “He told me a story about a rider in a match sprint who said that he wasn’t worried after qualifying for the gold medal ride because worst case he would be second. Houshang told me that is the worst possible mentality because you have lost before giving yourself a chance to win. So there I was, on the trainer, setting some season personal bests for power and heart rate, yelling at myself to keep going. I kept telling myself ‘you will win’ as I felt like I was about to explode. My legs were on fire, my lungs were burning, but I kept talking to myself, and hearing Houshang’s voice in my head. After two hours of racing on the trainer, it was finally the sprint. I got a lead out from my teammate and took the win, with her coming in second place.”

Houshang has been Zoe’s coach since the 2018-2019 season. “From the start she showed a great deal of potential and ability that I believe will take her to the world stage,” he says. “She is very coachable and her commitment and work ethic is what every coach wants from a rider. This is very motivating for me and it is a pleasure working with Zoe.”

Zoe is looking forward to more virtual races. “I learned a lot about myself this past weekend and got to practice the self-talking strategies Houshang has been teaching me all winter. I am excited to race more, which is good because my placings this weekend qualified me for the pro races next weekend.”