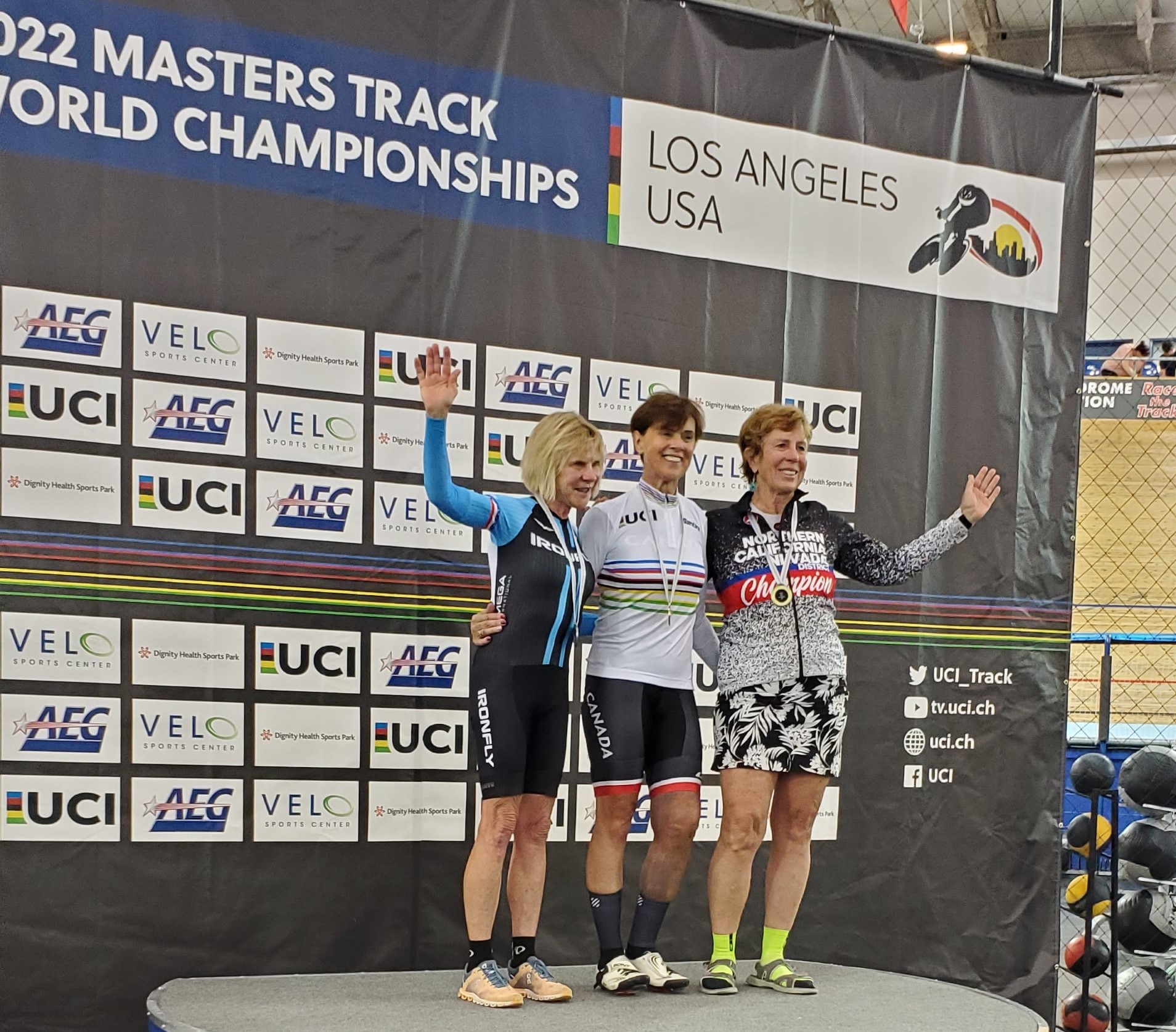 On the podium. Photo: PCC

PCC Masters athlete Renate Walton recently won the Individual Pursuit at the 2022 World Championships in Los Angeles making her a new 70-74 age group World Champion. A few days later she won a silver medal in the 500m ITT. Here is her story.

My journey started four years ago when I froze doing the I.P.in L.A. Returning home, I got hit by a car getting a fractured collar bone and a dislocated AC joint. Then of course it was COVID. The comeback trail seemed to take forever. I told my coach Houshang Amiri that I wanted to try again. The road had a rocky start as I ended up with COVID earlier this year, then got Shingles. Once again Houshang had to keep changing training plans to accommodate my fitness.

The World Championships returned to Los Angeles, and we finally put our plan into place, and we drove to L.A. We arrived early for me to get accredited on the track so I could ride in “open track” sessions, which of course started early in the morning. Everything was going great until the one two second brain fog hit, and I apparently slowed down going around the corner and fell down the banking like a sack of potatoes – lol. My leg swelled up immediately. I landed on my left side and ended up with a fracture and torn rotator cuff and a black and blue swollen leg. Thankfully, I still had a few days to train for the IP and had to adapt to riding in the indoor velodrome. Again, Houshang had more adjusting to do.

When the day of the race came, I misjudged the timing in the gate and fell very gracefully, again on my sore shoulder. I felt good during the race, focusing on my lines and Houshang’s encouragement on each lap. Like everyone else I thought that maybe I could have gone just a bit faster. I found out after the race that my competitor Mary Ellen Allen was the current record holder for the IP which she got in August in Aguascaliente, Mexico. So, I was very excited when I won the Gold Medal and finally got my jersey that I have been dreaming of. The women that I competed against were lovely, funny, and competitive. I have made new friends.

After several more days of training, it was time for the 500m TT. I have to admit that my shoulder was sore and during the warmup I felt like I had re-injured it. Anyway, no excuses but I had a horrible start which cost me first place, but still managed a second-place finish.

It was nice to have athletes there that I knew like Heather and Eric Simonson, Keith Bruneur and John Mayer, to support and cheer me on as I did for them when they raced. There were also other Canadians that I met while we were there. It was a such a special feeling that I will cherish.

Finally, to the most important person who made all of this possible, my coach Houshang. A man who I truly respect and admire. Without his commitment and encouragement to my training and forever changing my plans, I would not be able to ride at this level. Just being at World’s is an accomplishment, but realizing all the hours he puts in, and forever ending encouragement and definitely a kick in the butt when I needed it, made me want to work a little bit harder despite my injuries. I cannot thank him enough for what he has done for me. I am looking forward to discussing my goals for next season. 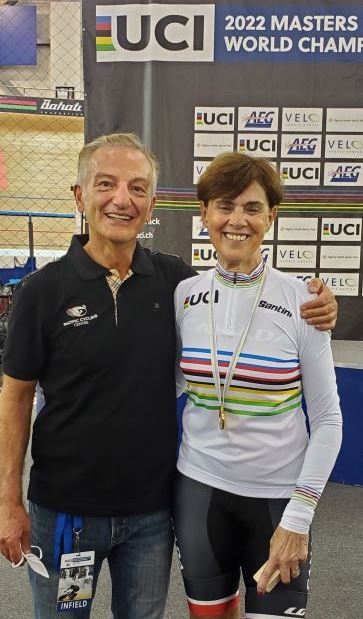